Assume, for a second, that the furry fandom is full of content creators and content consumers: Those who enjoy others' creative work, and those who produce new creative work to be enjoyed. (One can obviously belong to both categories, and can belong to either category to varying degrees.)

Most content creation is pretty obvious: Art, costumes, writings, photography, and so forth. The big question: Would you consider costumed performance to be a form of content creation?

P.S. For the sake of the conversation, I'm setting "content creators" aside from other important fandom contributors, including convention staff, community website coders and sysadmins, and other people who add to the fandom's ability to come together.

I call myself a libertarian-leaning Democrat.

I believe in LGBT marriages and anti-discrimination policies, and am pro-choice. Those aren't negotiable. I do see both sides of the gun control debate, and don't feel strongly either way. Drug policies should be left up to the states, as far as I'm concerned—that would allow some states the extra tax income and freedom while leaving some drug-free zones for those who want it.

I could also go either way on government size. Government can work when small and cheap, or large and generous, or some of each. That factors into tax rates, which work both high or low, but should be more progressive either way. The economic disparity is pretty ridiculous.

We need to balance the national budget and fix Medicare and Social Security, but it'll take at least a decade, and any faster might hurt more than it helps.

I can see myself voting conservative one day, but not with this crowd of jerks. Show me a sane libertarian-leaning Republican and I'd consider it. :)

So those are my thoughts. I'm sure yours are equally valid and I'm very curious to read them. Comment below!

Stuff going on in my life right now:

I'm behind at work, in general. This is my first time leading a project, and I really don't want to screw it up.

My dad's been in the hospital since Friday, after some 104 degree fever spikes last week. Turns out he has a large bacterial infection in his heart. He's comfy and on the road to recovery, via heart valve replacement surgery next month. We were hoping this would be a "year off" from medical stuff, after my mom's cancer the last couple years (from which she is almost fully recovered). I visited him last night. He's in good spirits, at least.

FC stuff is ramping up. We met last Monday all night, Saturday from 11 to 3:30, then I'm meeting again all night.

My new roommate moves in Friday. I'm excited, but there's still a lot of cleaning up to do this week.

And this morning, I woke up at 7am in Santa Rosa, had a dentist appointment, drove to Berkeley in time to dial into a 10am meeting, made it into work, have two meetings today, then I go home and get in the car to drive to Union City for the aforementioned FC meeting.

Wow! What a response! Thanks guys. So, the short version is, I think I'd like to start getting back into blogging again. 140 characters just isn't cutting it for me.

So, here's a doozy: Friendship.

I know an awful lot of people, and consider most of them friends. For that, I feel very blessed. But trying to keep up all of those friendships, particularly with a full-time job and a long-distance relationship, is a little much sometimes. I owe four people phone calls or emails, some of whom have been waiting for a week or more, and only now am finding the time to catch up to them.

In particular, one of the hazards is that at any given point I have some feeling of social obligation to both dancers and to furries (setting aside other life pursuits at the moment). In either community, I'm only really 50% there. Common sense says I should cut out one or the other, but I wouldn't feel right about that either. Who wants to desert half their friends?

At the same time, it's already happening. I've all but given up reading Twitter, Facebook, and Livejournal--not because I don't care, but because in my quest to find social fulfillment, the digital world is the first to go. I'm a surprisingly non-digital person, given my job and community--I just don't fe an evening in front of a computer, even if it's chatting with someone I miss.

And a consequence of only being there half the time is that I see a lot of things go by. If I'm only around half the time, I'm not really a part of either crowd--at least, I don't feel like I'd be actively missed. In the past, I've stretched my schedule to accommodate both groups at something closer to 75%--at the expense of sleep and sanity. But that won't do.

I suppose any man wants a group of friends that leaves him fulfilled and happy. While I have all these nice people I know, I wish I had enough hours in a day to truly be there for them--in both worlds--and have them be there for me, too.

Is anyone still reading this?

I haven't posted here in 5 months. But I can start again. :)

Sooo, I gave up on posting India Travelogue 2. There was just too much. I still have to go through a shit ton of photos.

And I haven't been reading/commenting here. I'm sorry. I've been slacking. It's easy to skim through 100 tweets while waiting for the BART, but harder to do so with Livejournal entries. I'm working on finding a way to make that easier. Commission by the professional, awesomely talented hodori on FurAffinity

So, as it is probably clear from my tweets (and conversations), I'm in India right now. Depending on how you count it, this is my second day of the trip, but third night, and neither of those counts the 24 hours of traveling I did across 36 'calendar hours'. Confused? I'm just getting started.

This whole thing is TL;DR, and is more for my sake than anything. Hopefully it will be found interesting to at least one other person, though. I can hope :)

Thursday was the travel day. I got my butt out of bed at 5:30am, in time for a 9am flight. Treated myself to breakfast at the airport, or rather allowed the corporate credit card to treat me. Flew 5 hours to Newark, including a few seconds of stark confusion ("what? we're over the ocean?") before realizing that I had taken my first-ever gander at the Great Lakes.

The hotel had a breakfast buffet, and I took good advantage of it, with a full British breakfast including roasted tomatoes and baked beans, with some delicious mango juice as well. By about 11:15, I was ready to sally forth into Andheri. (Andheri, by the way, is a northern suburb of Mumbai; I didn't get a chance to see the heart of the city, and will have to do so in another trip.)

I had wanted to see the "real" Mumbai: A version different from the PBS specials and Bollywood films and Kipling stereotypes I'd had before. The first thing: Where I was walking, at least, was an area of immense poverty. The homes, the streets, the smells, the trash, the flies, the stray dogs everywhere--it's different from any other experience I've ever had. Along any given block, you could find street vendors selling wheels and timber, bathroom fixtures, tshirts and hats emblazoned with "Hilfiger" and "Playboy", mobile phones, fruits and vegetables, and a wide range of just about everything else. American franchises like Domino's Pizza and Subway dotted the cluttered streets, next to street vendors selling cane juice and samosas. I got as far south as a McDonald's, and then didn't want to go farther for fear I'd forget how to get back to the hotel.

Mostly uneventful. Had breakfast, went to the airport wearing a light windbreaker, got on the plane, got off the plane on the runway (for once, instead of the gate directly), and instantly regretted the windbreaker. It's 42 degrees centigrade (110 fahrenheit) and was simply BAKING.

The guest house is extraordinary. It's within this huge and elaborate building complex, and is elegantly laid out with its own caretaker. People have lived up to a couple of years at a time in the guest house, and after tasting the egg curry and cilantro dal that the chef prepared for me, I can see why. I'm getting spoiled rotten here.

Alas, though, I should sleep; I have work in the morning. I'll be posting pictures soon, though, and I'm certainly having fun and taking care of myself.

Open to: All, detailed results viewable to: All. Participants: 14

What's your favorite kind of bagel?

So, the new job will be starting in 3 weeks, and FWA/ATLX madness is in two weekends. The question now is, where am I going to live after Tom moves out?

Let's back up. Tom is my friend from high school, and is graduating from Berkeley at the end of May. He offered to move out June 1, but could stay as late as August before he starts grad school Somewhere Important. (One of UNC, University of Colorado Boulder, Cal Tech, or MIT. He's scary smart.)

We've been living in this nice North Berkeley apartment, about a block from University Ave, and five minutes' walk from the North Berkeley BART. The rent is crazy low, all things considered...it's a reasonable 2bd/1ba apartment for $1300, with a coveted Berkeley off-street parking space. (The manager explained when we visited that they hadn't found any tenants to their liking; it seems the landlady would rather set the price low and choose low-stress tenants. Not a bad strategy.) The landlady is certainly very kind, the neighbors are nice, my grandmother and aunt are a ten minute walk away, and my brother is up at Cal finishing off his freshman year. Plus, Berkeley is very walkable and pleasant. Anyway, suffice it to say that we love it here.

But when Tom moves out, I have three options: move out, get another roommate here, or stay here alone.

If I move out, then I get the possibility of living in San Francisco (closer to my new job), and with more awesome people (presumably). At the same time, rent (per bedroom) is probably going to be more than I have now, I'd probably have to deal with driving and parking in the city, and there's always the risk getting roommate or landlord drama.

At the same time, someone could also move in here, and the someone would likely be current-coworker-and-all-around-great-guy Jo3hn. I could easily see myself living with him without trouble, except that this place is a bit smaller than his current room/house.

Finally, there's the prospect of living alone. I didn't do well living alone for my junior and senior years at Cal—too lonely—but things might be a bit different now that I have a car and a lot more friends around here. Plus, the room Tom's in right now would make a spectacular work room for programming and fursuit work—but the cost for that luxury is close to $700 MORE per month than I'm paying right now. That's $8,400 of my after-tax dollars per year. I could do it, but I don't know if I want to.

So, those are my options. What do you think?

At the risk of offending anyone who didn't hear about the party, I *am* proud of these particular photos. I got a new flash (Canon Speedlite 430EX II) and actually got to use it to make something vaguely artistic. So there.

Can't wait to take more of these! 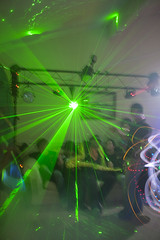 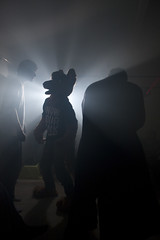 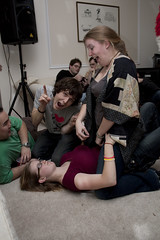 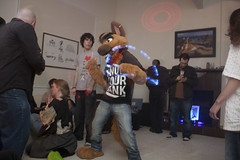 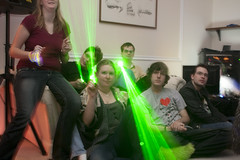